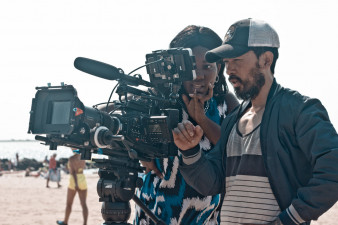 Viktoria I.V. King is an award-winning British-American Director, Writer, and Photographer. She's directed & produced content (Theatre, Opera, & Film) both in the UK and the US!

Slated for production in the next 3-6 months:

+2 features including a British Comedy and 4 short film projects in development!

Based off your One on One page, Viktoria will assign you sides 1-3 days in advance from her past and upcoming projects!

Viktoria I.V. King is an award-winning British-American Director, Writer and Photographer. She's directed & produced content (Theatre, Opera & Film) both in the UK and the US. Her films have been selected in mulitple international film festivals such as Official Latino Film Festival, Newfilmmakers NY Film Festival, Hip Hop Film Festival (3 upcoming premieres in 2019), Crown Wood International Film Festival, DTLA Film Festival, Los Angeles Film Awards, Big Apple Film Festival, In-Short Film Festival and so many more. Her films have also won awards internationally, including her also being singled out as Best Director in some film festivals such as the Honolulu Film Awards as well as winning the both the Grand Prize at the Asian American Film Festival's 72nd Hour Shootout and the Audience Choice Award at Katra Film Festival for her work as producer on "Extinct" that had a limited TV release for Time Warner.  She's been featured in Raindance, GirlTalk HQ, Black Girl Nerds and Guyanese Girls Rock. She's the Creative Director and Executive Producer at CYNE 59 Productions (cyne59.weebly.com). She also has received a fellowship to the Rocaberti Writers Retreat in Southern France for October 2019.

Viktoria's work and creative eye is greatly influenced by her international background. As a largely visual director, she creates stories with a focus on displaying truth and humility. Her work has had themes surrounding or about: broken people trying to connect, identity and social & political relevant stories. She is a storyteller first. She is also the creator of the multi-award-winning comedic series "FML" (F**k MY Life) Series that had successful distribution with REVRY, Roku TV and Brooklyn on Demand.