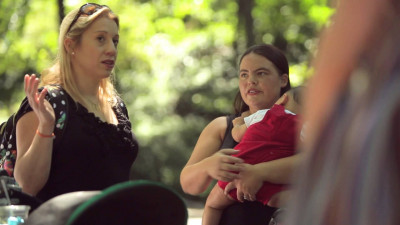 Learn tricks for booking commercials from UCB teacher and Commercial Casting Director Stacy Gallo - one of our most popular teachers!

Fine tune your on-camera commercial audition skills in this fun and relaxed class. Many of Stacy's students have been called in and BOOKED NATIONAL network spots as well as being connected and signed with top NY Agencies!

This class will conclude with a showcase with leading commercial agents from top tier agencies.

This is your chance to learn from an experienced casting director about the world of commercial auditions and the importance of improvisation. This three-week class is perfect for actors brand new to commercials as well as established commercial actors.

WEEK ONE: You will learn how to quickly interpret commercial scripts and bring out the best delivery you can. You will also be taught skills on how to feel and look comfortable in front of the camera and how to use improvisation to help enhance your performance. Cold commercial copy will be provided in first class.

WEEK TWO: You will have a script from the previous class to prepare for the following week's Showcase.

WEEK THREE: Present your work, with Stacy in the room, to two popular Commercial Agents who regularly call in One on One actors.

**Your scene work is video taped & made into a movie clip!
After each class, you will receive an email with a link so
you can watch your own video clip from this class.

PREPARATION
Please go to MY ACCOUNT to create your One on One Webpage. Be sure to upload your headshot and enter in your credits. It's especially important so that Stacy can view your online resume ahead of time.

Stacy has been a casting director in New York for the past 15 years. She started at MTV as a casting assistant and quickly went on to become head of casting on a live show. In 2001, she was tapped to create an in-house casting company for Hungry Man, called Downstairs Casting, and ran that department for seven years. Since going out on her own in 2008, she continues casting a variety of projects, including many national network commercials for notable directors and clients. Many of her students have gone on to sign with top commercial agents and have booked many national commercials as well as signed with some of the top commercial agents, including Maura Maloney at CESD, Phil Cassese at TalentWorks, Amy Mazur at Abrams Artists, Katherine Ryan at Don Buchwald and Associates, and Stacye Mayer at Paradigm. Visit www.stacygallocasting.com for more informaiton about Stacy and what she is working on!

After taking Stacy Gallo’s advanced commercial class and performing in the showcase, I signed with Shoshana Cantwell of Take 3!

After taking Stacy Gallo's commercial acting class I signed with Shoshana Robuck from Take 3 Talent after she attended the agent showcase.

After taking Stacy Gallo's Advanced Industry Workshop Commercial Class and Showcase, Luis was called in for a meeting with Jerry Kallarakkal of DDO!

After completing the commercial class with Stacy Gallo, Lucinda was called in by Jerry Kallarakkal of DDO and is now freelancing with Jerry!

After taking Stacy Gallo's two week class, Andrew was called in for a meeting with CESD!

After taking Stacy Gallo's Commercial Improv Class, Lucinda was called in for a meeting with Jerry Kallarakkal.

Phil Cassese is the senior on-camera commercial agent at Stewart Talent. Phil previously held the same position at TalentWorks, where he spent the last six years developing a highly competitive roster of talent. After spending several years in the music industry and personal management, Phil was recruited to helm the commercial division of TalentWorks. Prior to working for TalentWorks, Phil successfully created a commercial division at a small theatrical agency. Phil's interest in comedy led him to develop a strong roster of improvisers and comedic actors. He works on and has booked a wide array of commercial projects from multi-faceted campaigns to smaller niche projects.

Gina Manfredi is the On-Camera agent at DDO New York. She has been on the team at DDO Artists Agency for seven years. Gina Manfredi is this year's winner of the Heller Award for Commercial Agent of the Year. She is dedicated to the success of her clients and is enthusiastic about developing and maintaining positive business relationships. Gina attended Wagner College in New York City where she earned a degree in Arts Administration.

After meeting Irene Cabrera and Ginna Manfredi of DDO Artist Agency during the Advanced Industry Workshop, Becca began freelancing with both of them!

After taking a session at One on One with Gina Manfredi, Josh Rhett Noble was called in for a followup meeting and is now working with DDO Artist Agency!

After taking a session at One on One with Gina Manfredi, Dante Costabile was signed with DDO Artists!